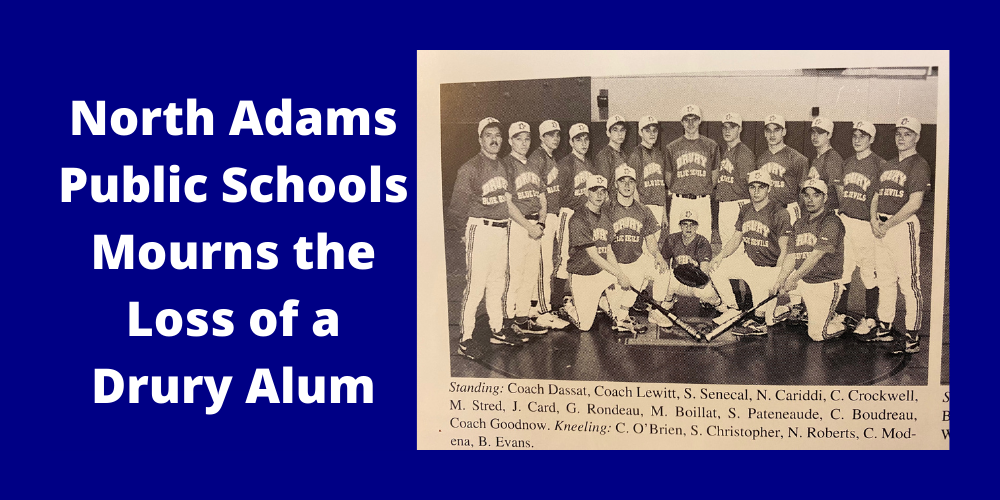 Office of the Superintendent

Today,  we are welcoming our elementary students for a full return to in-person learning. As we do so, our community is grieving the loss of one of our native sons, William (“Billy”) Evans, Drury High School class of 1998. The quote chosen by Billy for his Drury High School yearbook, read "When I die, I would rather have children ask why I don't have a monument, rather than asking why I do have one." There are educators in our schools and members of our community who have lost a former classmate and friend. Collectively, we want to offer our heartfelt support and  deepest condolences.

A message from Mayor Bernard included, "On behalf of the City of North Adams I offer my condolences to the family, friends, and colleagues of Officer Evans, and I also offer prayers for the other officer injured while defending the capital, and thoughts for the well-being of the Capitol Police force following this tragedy."

Please see the the April 2nd article from the Berkshire Eagle:

Officer killed in Capitol attack was a native of North Adams

NORTH ADAMS — The Capitol Police officer killed on Friday was a native of North Adams and a graduate of Drury High School.

William “Billy” Evans was killed after a man rammed his vehicle into two officers at a barricade outside the U.S. Capitol. After hitting the officers, the attacker exited the vehicle with a knife and lunged at them, according to Capitol Police. The suspect died after being shot by police.

Evans was born in North Adams and later moved to Clarksburg with his family, according to childhood friend Jason LaForest, a North Adams city councilor. He turned 41 earlier this year and had two young children, a daughter and a son, LaForest said.

“He loved making people laugh,” said LaForest. “He loved telling jokes and carrying out pranks on his friends and family. He loved being a dad. And he was so proud to be a U.S. Capitol Police Officer. He carried his badge everywhere. He was just so proud, and his family was so proud of him. We were all proud of him.”

At Drury, he was on the baseball team and played trumpet in the school band. In college, Evans and a friend from North Adams decided they both wanted to join the U.S. Capitol Police.

That same friend called Evans’ mother on Friday to tell her that he had died, LaForest said.

“It’s been surreal to hear a loved one’s name on the national media and to watch a funeral procession for one of your childhood friends coming down Pennsylvania Avenue, with the pomp and circumstance we afford national heroes,” said LaForest. “Billy now is a hero, but that was never his goal. He was just a great guy who wanted to serve his country.”

“It’s just a shock,” Barrett told The Eagle. “To everybody that I’ve spoken to. We see these things on national TV, and in a small community like North Adams and Clarksburg, it’s a shock when it’s one of your own. This really hits home.”

Kristin Wilson, a CNN producer, told the network that Evans would always have dad jokes to use on people who worked in the Capitol.

“[He] always had either a kind word ... or he’d give you some sort of grief,” she said. “Which is what I think he always really enjoyed doing to me and some of us he sees all the time. ‘Why are you here so late, why are you coming in so early, don’t you have family, don’t you have somewhere to go?’ Giving us trouble.”

Evans, a member of the Capitol Division’s First Responder’s Unit, had served with the Capitol Police since 2003.

“Our hearts break at the death of brave Officer Billy Evans, an 18-year veteran of the United Stated Capitol Police force and Massachusetts native,” wrote Sen. Ed Markey, D-Malden, in a statement. “Officer Evans was a hero, a patriot, and a beloved father and friend. To the Capitol Police who has endured so much loss and trauma this very short year, you have my gratitude for your strength, courage, and service. The Capitol Police are our everyday and every day defenders of democracy, and I thank them. We need a full investigation into today’s attack on the Capitol. My condolences and prayers are with Officer Evans’s family and loved ones.”

“We are a grateful nation in mourning,” he said in a statement. “This evening, my thoughts are with his family and friends who are grieving his untimely passing.”

President Biden also offered his condolences in a statement on Friday.

“Jill and I were heartbroken to learn of the violent attack at a security checkpoint on the U.S. Capitol grounds, which killed Officer William Evans of the U.S. Capitol Police and left a fellow officer fighting for his life,” Biden said. “We send our heartfelt condolences to Officer Evans’ family and everyone grieving his loss. We know what a difficult time this has been for the Capitol, everyone who works there, and those who protect it.”